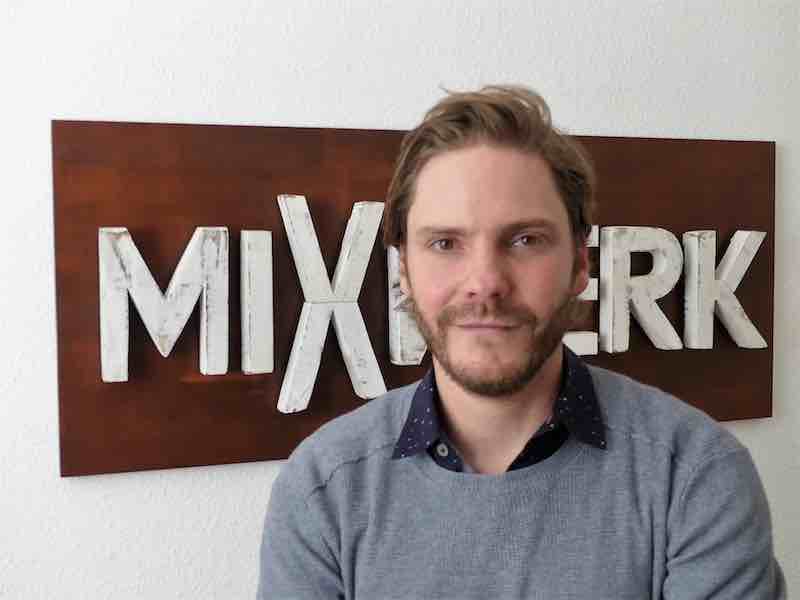 The actor Daniel Brühl visited our voice actors agency for a recording. He is the English voice in the film "The Promise" ("Das Versprechen" in German). The documentary tells the story of Jens Söring, who for the last 32 years has been serving a prison sentence in the USA for a murder he probably had not commit. Below, the interview with Daniel:

Daniel Brühl is one of the most prominent German actors with an international career. He has risen to fame in the United States thanks to roles in such films as "Inglourious Basterds" by Quentin Tarantino. Daniel Brühl had decided to lend his voice to the film "The Promise" in the hopes that his notoriety will attract people's attention to the case presented in the film.

The actor was born Daniel César Martin Brühl González,the son of a German television director and a teacher from Spain. When he was only 8 years old, he won a poetry recitation competition, which lead him to the radio station WDR. He worked in dubbing and as a voice actor in radio dramas, learning the craft of a professional voice actor from scratch. After graduating from high school, Brühl decided to become an actor.

His first time on the big screen was in the film "Schlaraffenland" in 1999, however the breakthrough roles in his career as an actor were in the films "Das weiße Rauschen" in 2001 and "Good Bye, Lenin!" in 2003. Below, the trailer for the latter one:

Daniel Brühl plays Alexander Kerner, the son of a lady who "overslept" the fall of the Berlin Wall because she had been in a coma. The son leads her to believe that she still lives in the old GDR. The film won numerous awards, the French César among others.

Next came such films as "Merry Christmas" or "Salvador". Both of the films were hugely successful and brought more international attention to Daniel Brühl. That was when the world-renowned filmmaker Quentin Tarantino gave him the main part among German-speaking actors in his film "Inglourious Basterds". Brühl played the "war hero" Frederic Zoller, next to Brad Pitt, Diane Krüger and Til Schweiger. Here is the trailer:

The film director Quentin Tarantino re-writes the history of the Second World War - in his version a group of Jewish soldiers and members of the military resistance join forces to fight Hitler. Daniel Brühl plays Frederick Zoller, who manages to persuade Goebbels to organise the premiere screening of the propaganda film where Zoller plays the main role in the movie theatre where the members of the resistance are planning an attack on the nazis.

Like Daniel told us in his interview with the voice acting agency, the film director Ron Howard saw him in "Inglourious Basterds" and offered him the role of Niki Lauda in his film "Rush". Below, the trailer:

The plot of the film revolves around the duel between Niki Lauda and his rival James Hunt, portrayed by Chris Hemsworth. Hunt is a party animal and a playboy. Lauda is a talented perfectionist. In 1975, Lauda becomes the Formula One World Champion, which causes Hunt's severe depression. But a year later, the situation changes drastically.

Daniel Brühl's most recent work, in 2018, includes the political thriller "Seven Days in Enttebe" where he plays Wilfried Böse, who together with an accomplice highjacks an Air France plane. Here is the German trailer:

Did you ever heard of ISDN Recording ?